Six months, thousands of cities and communities, countless modernized mobile masts throughout Germany. The technology specialists from Vodafone have created a new network across Germany - and built in just half a year, the infrastructure for the Internet of Things. With a first 5G technology. The new machine network is specially optimized for cost-effective and energy-saving networking of objects. As the first telecommunications company Vodafone has the 5G technology, Narrowband IoT 'enabled over a large area throughout Germany. This now allows cost-effective networking of items moving across the country. For example, in logistics: raw materials, parcels or containers can be networked and monitored at all sites via the machine network throughout the entire value chain."The machine network is a central pillar of the digital revolution and an important step to 5G. The rapid expansion throughout Germany opens up new digital opportunities for our industry and our cities, "said Vodafone Germany CEO Hannes Ametsreiter.

In March, Vodafone had the expansion of the machine network started in Dusseldorf and Berlin. Only six months later, the telecommunications company has activated the technology in several thousand cities and municipalities and thus reached the goal formulated for the expansion start. Theoretically, the new machine network can transmit up to 4 billion devices simultaneously. A single mobile radio cell can use the technology to network up to 50,000 objects in parallel. An investment in the future: Already today, Vodafone networks 74 million objects worldwide via mobile phone. Tendency rising: Every month, around two million more things go online. From the truck tire reporting to the driver in case of pressure drop, to the water meter, which transmits its current status every day, to the e-bike, which sounds the alarm when stolen.

With the technology, data can now be transmitted across Germany considerably more energy- and cost-saving. Because the machine network is a power-saving network. The range of things that migrate into the machine network is huge. No matter what the object is: A simple sensor is enough to make it smart. The states that detect the IoT sensors are many. This can be, among other things, movement, humidity or level.

Vodafone is also driving the expansion of the machine network globally. Vodafone has already activated the technology in the Czech Republic, Greece, Ireland, Italy, Spain, Australia, the Netherlands, South Africa and Turkey. By the end of 2019, the world's largest narrowband IoT network is set to broadcast in ten European countries. Great Britain, Romania and Hungary are also to receive the technology in a timely manner. 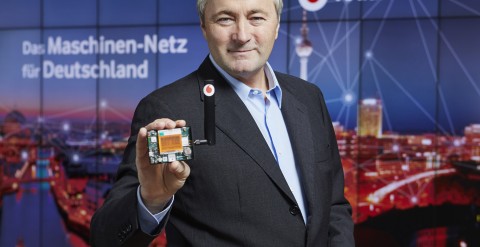