The launch reflects VimpelCom’s ongoing commitment to offer new products and services to its customers as they navigate the digital world on the back of its ambition to transform all its global operations into leading digital players. VimpelCom has already launched 4G/LTE across nine of its 14 markets, including Armenia, Georgia, Italy, Kazakhstan, Kyrgyzstan, Pakistan, Russia, Tajikistan, and Uzbekistan.

With the launch, Djezzy is offering the largest coverage across the country and the fastest mobile digital service, enabling consumer and business customers to make high quality video calls on the move, download high-definition movies and instantly access the web on the go.

Djezzy’s Chief Executive Officer, Tom Gutjahr, said: “Djezzy’s 4G/LTE roll out is not simply an evolution, it’s a revolution for Algeria and will change the way we interact with our customers through the digital world. We are pleased to be rolling this innovative service out in Algeria, enabling access to a world-class high-speed network for more and more people across the country.”

The launch of 4G/LTE is expected to boost Algeria’s economy, advance innovation, productivity and better optimize costs, reflecting the high quality network experience that countries such as the UK, the US, Sweden, Japan, Italy, France, Germany and South Africa have enjoyed.

Addressing Algerian media at a news conference on Sunday, 2 October 2016, Vincenzo Nesci, Executive Chairman of Djezzy, thanked the Algerian Regulatory Authority and the government of Algeria for facilitating the launch of 4G/LTE, and highlighted the successful partnership with Djezzy’s partner, Fonds National d’Investissement (“FNI”), the Algerian National Investment Fund. Kamel Mahfoudi, a member of Djezzy’s Board, representing the FNI, congratulated Djezzy on the launch of 4G/LTE and stressed the importance of such new technology in the development of a digital ecosystem in Algeria.

Commenting on the launch, Yogesh Malik, Group Chief Technology Officer at VimpelCom said: “Algeria is an important market for the VimpelCom Group and, as a company that is customer obsessed, we are proud to offer 4G/LTE to our over 16 million customers and to furthering the digitalization of the country. VimpelCom is striving to bring digital enablement to each and every one of our more than 200 million customers across all our geographies and we are pleased to add Algeria to our portfolio of countries where 4G/LTE and high-speed wireless network are today a part of our standard offering.” 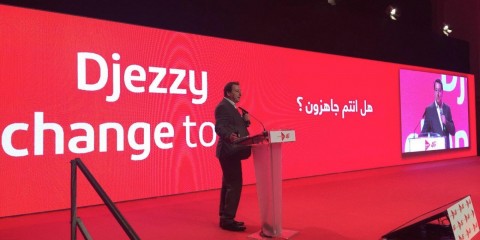