Cat-M1, or LTE Category M1, is a radio technology that offers benefits such as high mobility, low cost, wide coverage, flexible deployment and low latency. Adding VoLTE support to Cat-M1 ensures devices based on this technology have the capability to make voice calls. With CAT-M1 VoLTE, operators can deploy low-cost networks while meeting demands for diversified mobile broadband and communication services use cases for the IoT.

Guanglu Shao, Executive Director and Senior Vice President, China Unicom, says: “China Unicom aims to drive the development of the IoT and accelerate cellular network development and large-scale business implementation by constructing the leading 4G FDD network. We launched NB-IoT on a pre-commercial basis on May 12 in Shanghai. This cooperation on eMTC with Ericsson and Qualcomm is a new venture intended to boost social intelligence and the Internet of Everything through wide cooperation and the construction of leading networks.”

Frank Meng, Chairman of Qualcomm China, says: “We are pleased to have successfully demonstrated the great potential and unique advantages of VoLTE on LTE IoT Cat-M1 to support new IoT applications and service areas, especially for use cases requiring voice. Our LTE IoT modem solution is designed to support the low-power, cost-efficient and global deployment required by many of these IoT applications. We look forward to working with key ecosystem leaders, including China Unicom and Ericsson, to quickly bring the benefits of LTE IoT to people and organizations everywhere.”

Emergency communication panels are widely used in a variety of scenarios, including fire alarm trigger panels, urban and highway emergency assistance communication panels, and elevator emergency call systems. However, these systems can be very complicated to deploy and require distributed support systems for various applications. With Cat-M1, these emergency communication devices can be designed or retrofitted to support wireless connectivity for more flexible deployment. With the addition of VoLTE capability, voice communication between these devices and emergency centers is supported. In addition, these devices can be centrally managed by the Ericsson IoT Accelerator platform to enable easier configuration of end-to-end services.

For example, fire alarm trigger panels can be configured so that a single press of a button notifies multiple first responders and stakeholders, such as the fire department, the hospital, and the building’s property management office. Using VoLTE capabilities, the person who triggered the alarm can describe the situation to rescuers and get immediate guidance.

The capacity limitations of GSM- or LTE-based mobile phones or walkie-talkies are such that coverage can be limited in remote areas. As a result, there is a risk that people may not be able to use these devices to contact families or first responders in an emergency. The improved coverage and longer battery life offered by Cat-M1 technology can be used to create more reliable GPS emergency tracking devices. Such devices can use data services to send GPS location data while enabling VoLTE calls for coordinated emergency response. 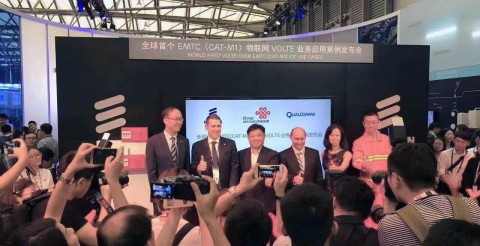