The following article serves to build an understanding about the antenna parameter known as Passive Intermodulation (PIM). PIM has recently become a critical parameter in component design due to new technologies in wireless communications allowing the use of higher transmit powers, wider bandwidths, and multiband/combination antennas. PIM lowers capacity and data rate by limiting receive sensitivity, and as wireless usage grows pressure is on operators to squeeze the most out of their spectrum.

Passive intermodulation (PIM) is a form of intermodulation distortion that occurs in passive components such as antennas, cables, connectors, or duplexers with two or more high-power input signals. This distortion is typically cased by the interaction between mechanical components, especially where two different metals are in close proximity. Junctions of dissimilar metals are a prime cause, but also caused by corrosion, loose connections, dirt, or the presence of nearby metal objects like cable ties, guy wires, brackets, and so on.

Passive intermodulation is the low level signal created as the result of multiple high power transmit signals in an antenna. This relatively low power signal is generated at a new distinct frequency and has the potential to inject interference in the receive band thereby degrading the uplink reception.

When disclosing passive intermodulation on test reports and datasheets, Halberd Bastion follow the BASTA reporting recommendations. BASTA define the reporting of PIM per the following specification:

PIM testing is conducted by all reputable manufacturers using specialised PIM testing equipment such as Kaelus PIM Analyser. Field PIM testing will not be discussed in this article. There are two types of PIM testing, Reflective/Reverse PIM Testing, and Forward PIM Testing.

Reverse, or reflective, PIM testing is the most commonly used type of PIM test. This test sends two signals to an antenna and uses the same test port to capture and measure any intermodulation products. While simpler, a key downside to this type of testing is that results are affected by the antenna cable length which can invalidate test results if performed at fixed frequencies.

Forward PIM testing with antennas involves measuring the signal transmitted through the antenna system under test. This requires an external receive antenna installed in an anechoic chamber, and spectrum analyzer. 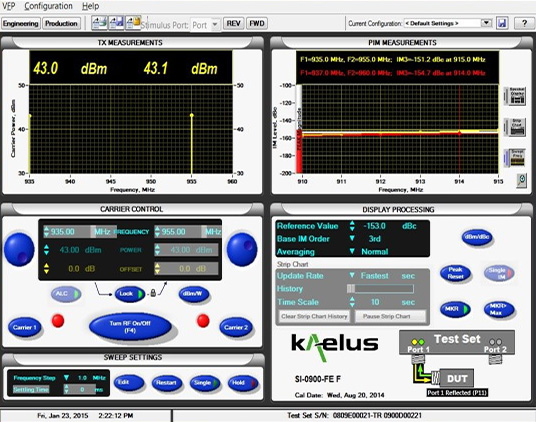