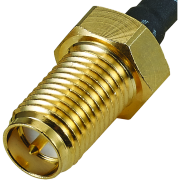 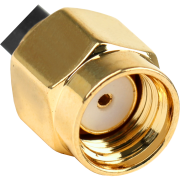 Reverse-polarity SMA (RP-SMA or RPSMA) is a variation of the SMA connector specification which reverses the gender of the interface. This non-standard type SMA connector finds common application in WiFi and WLAN systems and is the most popular reverse polarity RF connector. The reverse polarity characteristic is achieved with a reverse mating interface in which the RP-SMA connector male houses the female receptacle while the RP-SMA connector female/jack houses the center pin. SMA series has a 1/4 - 36 UNS threaded coupling and can operate up to 18 GHz when using semi-flex or semi-rigid cable types.

SMA was originally designed at Bendix Research Laboratories by James Cheal in 1958 and began life as the 'BRM connector', an acronym for Bendix Real Miniature connector. Its development was continued in 1962 by Omni Spectra when the connector became known as 'OSM' which stood for Omni Spectra Miniature. In 1968, it was incorporated into MIL-C-39012 where it received its current designation of SMA. The RP-SMA variation came about with the rise of consumer-grade wireless equipment. Reverse-gendering of contacts was implemented to prevent the attachment of external antennas that might breach EIRP / TRP restrictions.

RP-SMA connectors are almost exclusively used in consumer WiFi equipment and hardware integrating two technologies such as Cellular or GNSS and WiFi to prevent incorrect attachment of antennas.

This series is a variation of the standard SMA connector.