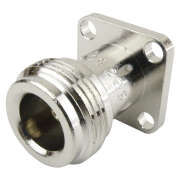 The "Navy" series connector, also known as Type-N or N-Type, was originally designed for military communications. N connectors have a 5/8 - 24 UNEF threaded coupling and are often considered weatherproof for low frequency applications, however lack of internal gaskets make weatherproofing necessary for reliable operation. N connectors have a 50 Ω characteristic impedance, with 75 Ω variations also available with modified contact and dielectric configuration. The interface follows MIL-PRF-39012 (MIL-STD-348B), CECC22210, and IEC 61169-16 standardisation. Most manufacturers specify an upper operating limit of 6 GHz, with high quality variants up to 11 GHz, and precision types operating to 18 GHz.

It should be no surprise that the N connector finds its origin with the US Navy Bureau of Ships, with its first development in 1942. The original MIL-C-17 type N connector had a non-optimum design which severely limited applications at higher frequencies. This forced several manufacturers to develop improved performance designs, such as Blue Dot by Maury Microwave in 1962. The 18 GHz precision N connector was developed by a series of manufacturers including Amphenol, Hewlett-Packard, and Maury, becoming commercially available in 1965.

The N connector remains one of the most commonly used RF connector in circulation. The connector is widely available for a range of cable types; flexible, corrugated copper tube, and semi-rigid / semi-flex transmission lines. N connectors can be found in any telecommunications application from VHF to Sub-6 GHz microwave.

N connectors are available in General Purpose (the common N connector we use today), a precision type operating to 18 GHz, and a variation governed by MIL-T-81490 termed the EWN connector.