This page acts as a quick reference to IEEE Std 315-1975 for the production of antenna component diagrams, containing the most commonly used RF symbols. It is important to note that this article is not exhaustive and contains only commonly used symbols. Symbol graphics are provided free for use to all Halberd Bastion clients.

Types of functions may be indicated by words or abbreviations adjacent to the symbol. Qualifying symbols may be added to an antenna symbol indicating properties. If required, the general shape of the main lobes may be shown adjacent to the symbol and notes added to show direction and rate of movement (for example, radar rotation).

Two general antenna symbols are commonly accepted, and can be used interchangeably. Dipole, Loop, and Counterpoise may be indicated using their respective symbols if desired.

Qualifying symbols can be used to indicate a special property of the antenna to indicate polarisation, direction of radiation, or a particular application. These should only be appended to antenna symbol if essential. Some examples provided below. It is important to again note that these symbols are not exhaustive.

The following denotes a radar antenna rotating four times per minute in azimuth, and reciprocating in elevation 0° to 57° to 0° in one second. 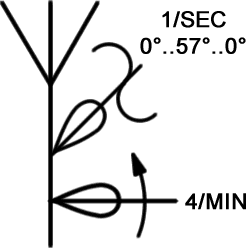 RF connector genders are designated either Male (Plug) or Female (Jack) based on the physical characteristics of the connector body and centre contact. The following symbols indicate male and female coaxial connectors. It is important to note that the contact symbol is not an arrowhead, it is larger and lines are drawn at a 90 degree angle.

In identification of the female RF connector, the centre contact consists of a receptacle/socket. Body features a coupling mechanism complementary to the plug.

In identification of the male RF connector, the centre contact consists of a pin. Body typically features the active part of the coupling mechanism (e.g. coupling nut).

The symbol below represents a male and female coaxial connector when mated.

The symbol below represents the mating of genderless coaxial connectors.

The symbol for a wireless link is represented simply by the display of transmitting and receiving antenna symbols, connected by a Radio Link transmission line symbol, which consists of a series of dashes.

Commonly used waveguide symbols are found below. Mode of propagation and other special characteristics, including depicting subtypes, may be indicated by the use of qualifying symbols or characters.

The most common type of surge protection found in RF applications is the gas-discharge tube lightning arrester.

Symbols in this category refer to passive system components used in RF transmission. For all other couplers please consult IEEE Std 315-1975. Number of coupling paths, type of coupling, and transmission loss may be indicated by the appending of appropriate qualifying symbols.