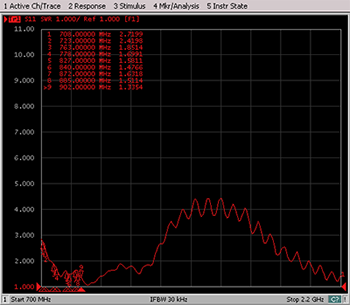 One of the key parameters of any radio transmission component is VSWR or Return Loss (RL), which both measure how well the component is matched to other system components. Both are used interchangeably, with VSWR providing the measure as a ratio, and Return Loss providing the measure as a decibel figure. This short article we aim to provide an introductory understanding of these concepts.

The Voltage Standing Wave Ratio (VSWR) is defined as the ratio of the maximum amplitude to the minimum magnitude of the voltage standing wave at an input port of an antenna. The VSWR is a measure of the matching of the antenna to the source and feeder cables. A low VSWR will minimize reflections from the antenna.

When disclosing VSWR on test reports and datasheets, Halberd Bastion follow the BASTA reporting recommendations. BASTA define the reporting of antenna VSWR per the following specification.

In any wave system, whether it be physical (percussion/sound, water) waves, or electromagnetic, the interaction between any wave and a boundary will result in a reflection. The simplest example might be a sound wave hitting a thin wall, whereby some of the wave's energy is reflected off the wall back towards the source, with the remainder passing through the wall to be heard in the next room. The amount of energy being reflected vs amount transmitted is measured with VSWR (when expressed as a ratio), or Return Loss (when measured in decibels).

The simplest way to understand the parameter is considering these parameters as describing how well the transmission is 'absorbed' by the component. Return Loss, sometimes referred to as S11, is a little more intuitive, which expresses the absorption (or transfer) as a number of decibels - to provide a simple example, an antenna with a Return Loss of 10 dB can be thought of saying that the reflected energy is 10 dB lower than the input. Putting some numbers behind this example, a 20 W input would have a 2 W reflection and as such 18 W is absorbed by the antenna.

VSWR is slightly less intuitive but refers to the same measurement. In our example above, the power (dB) of the reflected sound versus the power (dB) of the sound present in the other room can be expressed as a ratio. Should almost all of the sound's energy pass through the wall we would have a ratio approaching 1:1, conversely if almost all sound was reflected back as an echo we would have an extremely high ratio, perhaps 10:1. These ratios can be directly converted into Return Loss, for example a perfectly matched system with a VSWR of 1.1:1 would have a Return Loss of 26 dB. Conversely a poorly matched system with a VSWR of 10:1 would have an RL of only 1.7 dB.

Understanding these concepts in our more familiar world of RF is not a particularly big mental leap. In the case of to antennas; our transmission is an electromagnetic wave rather than a percussion wave, our medium now copper wire, and our interface boundary is the metal-on-metal contact between connection points whether that be between two coaxial connectors or a solder contact on a PCB. The physics however remains the same.

Intuitively metal contacts are substantially more efficient at transferring energy, but less intuitive is the susceptibility of the much higher frequencies we are now operating at. To stress how important VSWR and RL are to your network, consider a reduction in performance from VSWR of 1.3:1 to 1.5:1 - this is a change in Return Loss of 16 dB to 13 dB. This 3 dB reduction in radiating/receiving performance means that to compensate your radio must now work harder, and consequently in the case of IoT systems reducing battery life (by having to broadcast louder) and reducing network capacity and performance (due to the lower modulation and coding scheme).

Accordingly matching of the antenna to its transmission line is absolutely critical to the performance of not just the individual device, but the entire network.

It's important to understand the practical consequences of VSWR and Return Loss on system performance, in which the effect is realised through Insertion Loss. For a given power input PI, VSWR will cause a reflection, and accordingly a loss of power PR, resulting in the effective transfer of power PO. For poorly tuned antennas PR represents a significant loss of system efficiency, resulting in reduced communications range.