The following article serves to build an understanding about the antenna parameter known as peak gain.

As such antenna gain should only be used as a means of comparison when the direction of transmission is known. In the case of broadcast and microwave antennas, a higher gain figure does indeed represent higher performance, as these types of antennas are aimed towards their receivers. However in the case of IoT, indoor, vehicle, and telemetry antennas the propagation path is generally not known in advance, and there may be several incoming paths (multipath).

Peak gain can also be referred to as Directivity, the key difference however is that directivity neglects antenna losses such as dielectric, resistance, polarisation, and VSWR losses.

Gain values are typically determined by the gain by substitution method, or the gain by directivity / loss method. These methods are briefly described below. Both methods can be used to validate the gain specification, and the validation process described below is applicable to gain data generated by either method.

Depending on antenna design, reporting of gain is based on the average value measured on all relevant ports and over the specified subband frequency ranges. The antenna gain must be specified for each of the subbands included in the frequency range of the antenna.

For antennas with electrical tilt, gain must also be reported at low, mid, and high electrical downtilt settings. A gain over all tilts is also specified, and it is calculated using measurements over all the antenna downtilt values.

Gain measurements must be made carefully to assure accuracy. It can difficult to repeat a gain validation measurement precisely and the accuracy and repeatability of a gain measurement is determined by a number of factors. Accordingly manufacturers generally define a repeatability margin, typically set between 0.5 and 1.0 dB - this means that repeated measurements of gain must fall within this tolerance. 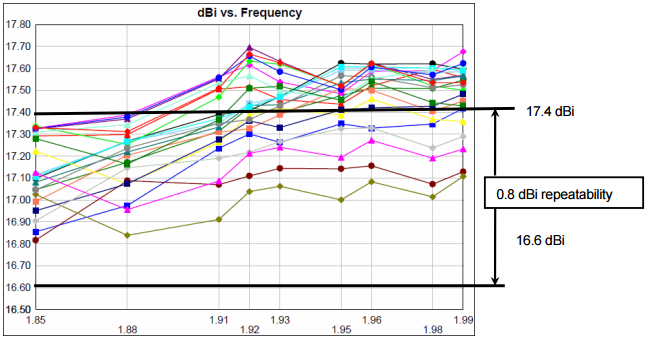 Two methods of testing for antenna gain are generally accepted - Gain by Substitution, and Gain by Directivity/Loss. The latter will not be discussed in detail due to its complexity.

Gain by Substitution method, also called Gain by Comparison method, involves using a known gain reference antenna to compare the antenna under test with. The gain reference antenna is typically an absolute gain calibrated standard gain horn. Due to its simplicity and accuracy, Gain by substitution/comparison tends to be the most widely used and accepted, and forms the basis of IEC 60835-2-2 and ETSI EN 301 126-3-1.

Step two is to measure the antenna under test in its phase center and main beam direction.

The gain of the antenna under test is found by taking the measured values under step two and adding the known gain of the reference antenna which is typically found in a gain table delivered with the antenna.

Gain (G) and directivity (D) are linked by the formula G = k x D, where the antenna effective factor k (0 ≤ k ≤ 1) corresponds to the overall losses of the antenna. Accordingly antenna gain can be calculated by the following formula, where a represents antenna losses comprising of all ohmic and dielectric losses between the input connector and the outer surface of the radome and the loss due to the impedance mismatch.