The following article serves to build an understanding about the antenna parameter known as Half Power Beamwidth (HPBW). Beamwidth is a simple metric used to describe the dominant direction of radiation, which helps RF engineers quickly assess suitability based on required transmission/reception aperture. Two figures are provided on all antenna datasheets; Elevation Beamwidth, and Azimuth Beamwidth, representing both vertical and horizontal planes. The terms vertical and horizontal can be used interchangeably, however it is important to note that E-Plane and H-Plane cannot as they refer to the electric and magnetic field vectors (dependent on polarisation).

Definition of Half Power Beamwidth

The 3 dB, or half power, beamwidth of the antenna is defined as the angular width of the radiation pattern, including beam peak maximum, between points 3 dB down from maximum beam level (beam peak).

When disclosing beamwidth on test reports and datasheets, Halberd Bastion follow the BASTA reporting recommendations. BASTA define the reporting of HPBW per the following (adapted) specification:

Azimuth and elevation beamwidths are calculated through measurement of the antenna co-polar radiation pattern. Radiation patterns are measured by rotating an actively transmitting antenna inside an anechoic chamber, and measuring power levels at set intervals. The angle from which power level is -3 dB down either side of the maximum power level (i.e., inclusive of beam peak) is defined as the antenna half power beamwidth. IEC 60835-2-2 defines appropriate test methodology. 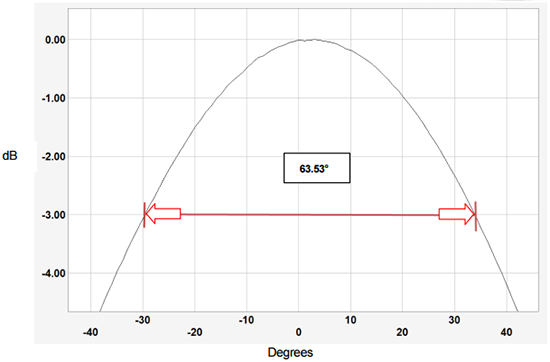