The following article serves to build an understanding about the antenna parameter known as Front-to-Back Ratio (F/B Ratio). The objective of any directional transmission is to ensure the most amount of power is radiated in the forward direction, with the least amount to the rear of the antenna. This parameter is used to help engineers designing directional systems (such as microwave or cellular broadcast sites) understand the potential interference radiated backwards by the antenna into collocated and neighbouring transmitters. High F/B ratio is also beneficial in many CPE applications, the parameter allows engineers to quickly gauge antenna performance - as less energy is radiated behind the antenna, ceteris paribus, engineers can expect gain, beamwidth, or both, will be higher.

As antenna back lobes (i.e., lobes of energy radiating to the rear of the antenna) are not necessarily perfectly 180° to the main lobe, it's important that the metric looks at a range of angles. Halberd Bastion adopt BASTA's recommendation of using a ± 30° angular region to determine a worst-case figure, so that a true minimum is obtained.

The front-to-back ratio, total power, ± 30°, is defined as the ratio of power gain between the beam peak and rear ±30° angular region of the azimuth cut, using the backward (180°) direction as the reference.

Front-to-back ratio is calculated through measurement of the antenna co-polar radiation pattern. Radiation patterns are measured by rotating an actively transmitting antenna inside an anechoic chamber, and measuring power levels at set intervals. An angular measurement boundary is set at ± 30° from the 180° position, the maximum (i.e., strongest) figure within the boundary is recorded and compared to forward gain to produce the final figure. 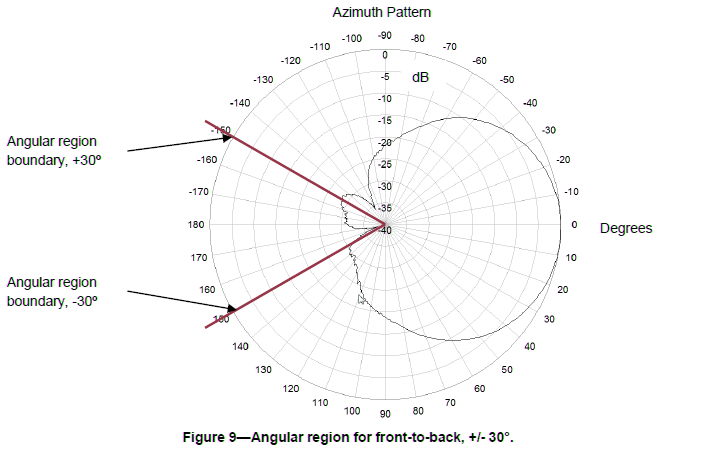