The following article serves to build an understanding about the antenna parameter known as Cross Polar Discrimination (XPD). Cross-polar discrimination is important for a low level of correlation between the orthogonally polarized propagation channels. Correlation generated by the antenna can negatively affect receive diversity and MIMO downlink performance of the system. For cellular and multipoint antennas, a minimum level of 8 to 10 dB within the relevant sector or beamwidth is recommended for minimum degradation to receive diversity and MIMO performance. The requirements for microwave antennas are significantly higher (20 to 30 dB), with minimum figures specified depending on the antenna's ETSI RPE Class (see ETSI EN 302 217-4-2).

Put simply, cross polar discrimination is a measure of how polar an antenna element is and used measure the rejection of an orthogonally polarised transmission. A high XPD figure means a cleaner signal in colocated transmission environments.

The cross polar discrimination is defined as a ratio of the copolar component of the specified polarization compared to the orthogonal cross-polar component over the sector or beamwidth angle.

When disclosing cross polar discrimination on test reports and datasheets, Halberd Bastion follow the BASTA reporting recommendations. BASTA define the reporting of XPD per the following (adapted) specification. As BASTA is limited in scope to base station antennas, specification definition has been broadened to cover other directional antenna types, such as microwave antennas.

Cross polar discrimination is calculated through measurement and comparison of the antenna co-polar and cross-polar radiation pattern. The co-polar radiation pattern is measured by rotating an actively transmitting antenna inside an anechoic chamber, and measuring power levels at set intervals using a receive antenna of the same polarity. Cross-polar patterns are measured in the same manner, but using a receive antenna of the orthogonal polarity. A minimum figure is then obtained within a defined sectoral or beamwidth boundary. It is important that this boundary angle be disclosed on the antenna datasheet. 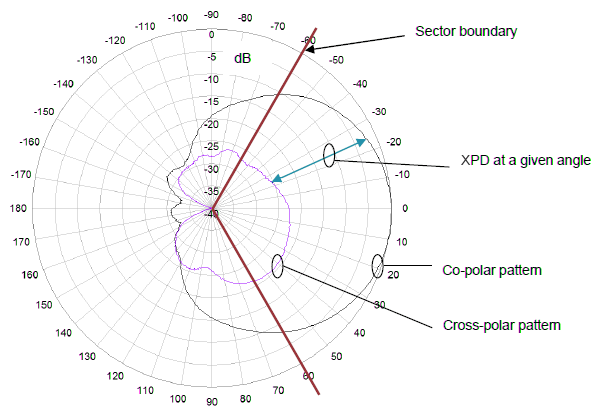