Madrid, Spain, Feb. 22, 2019 -- Vodafone Spain has become today the first operator in the world to make 5G standard calls from 5G mobile phones, after connecting the first smartphones to the 5G network with the specifications of the 3GPP NSA (Non Stand Alone) standard, which will be used later on commercial launch. The mobile phones have been connected to the Vodafone 5G network deployed in the center of Barcelona.

The operator managed to implement various services, including several video calls to Spanish journalists via the commercial network between Barcelona and Madrid with a Huawei terminal. In mobile tests, download speed of up to 1.7Gbps were achieved. Both the smartphones used and the Vodafone 5G network meet the specifications of the Non Stand Alone 5G - 3GPP Release 15 standard, approved last year.

Vodafone already achieved in February 2018 the first 5G connection in the world between Castelldefels and Madrid, although on that occasion, the connection consisted of a videoconference between a PC connected to a 5G standard test network and a 4G mobile.

It was also a pioneer in starting the deployment of a pre-commercial 5G network in Spain. In July 2018, it installed the first 5G NSA nodes in central areas of Madrid, Barcelona, ​​Seville, Malaga, Bilbao and Valencia. This deployment began only days after acquiring 90 MHz of contiguous spectrum in the 3.7 GHz band.

Vodafone Spain has already started several pilots in these cities to test possible 5G applications in the future. This is the case of the Connected Surgeon Project, in which a specialist surgeon guides, without being physically present and in real time, another surgeon who is operating in any operating room. Thanks to 5G technology, it is possible to transfer practical knowledge at critical moments. This pilot is part of a broad collaboration agreement that will make the Hospital Clínic de Barcelona the first 5G hospital in the country.

António Coimbra, CEO of Vodafone Spain, said: "the realization of this first 5G connection in Spain reflects the leadership of Vodafone and Spain in mobile technologies. The deployment of mobile networks is a factor of great relevance for the competitiveness and digital transformation of the country "

Yang Chaobin, President of Huawei 5G product line has stated:" Huawei is absolutely committed to the full development of network technology 5G The test done today shows the maturity of the development of 5G over the standard approved by 3GPP. We are ready to advance our collaboration with Vodafone and start commercial trials. "

Santiago Tenorio, Director of Architecture and Network Strategy of the Vodafone Group, commented: "This is a milestone of great relevance on the way to 5G, which we have to thank the engineers of Huawei and Vodafone who have worked tirelessly to implement the new specifications in record time. The success of today's test will allow us to move forward with new tests throughout Europe throughout 2018. "

Dr. Peter Meissner, CEO and member of the Board of the NGMN Alliance , said: "the first 5G call was made only two months after the new 5G standard on dual infrastructures (5G / 4G), the The term has been much shorter than what the Industry has foreseen. " 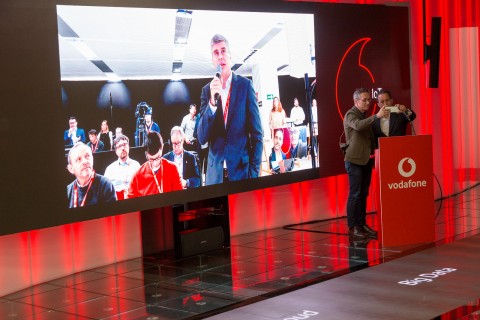