Bucharest, September 19, 2018 - Vodafone is the first NB-IoT network in Romania with national coverage ready to offer companies the opportunity to benefit from a wide range of solutions and applications designed to improve and streamline business processes. This national premiere comes soon after a successful NB-IoT technology test conducted by Vodafone Romania and OMV Petrom on equipment near production wells, in isolated areas without internet access and no GSM coverage.

NarrowBand-IoT technology offers extremely good energy efficiency, NB-IoT-connected devices with the ability to run for 10 years with a single battery charge. The low bandwidth requirements of the technology allow for the majority of solutions and applications based on this technology to require only a few bytes of data to communicate on a daily basis with these devices.

"Vodafone Romania takes a step forward in an era of people and interconnected devices by launching the first NB-IoT network in South East Europe. This launch strengthens our leadership position in the IoT solutions market and will support a comprehensive portfolio of applications that bring our customers an extensive set of benefits, such as more relevant information, lower costs and increased employee productivity , " said Valeriu Nistor, Enterprise Director Business Unit, Vodafone Romania.

"We have made this improvement on our nationwide network to deliver services based on NarrowBand-IoT technology. It is a natural step in a world where companies adopt large-scale IoT solutions. NB-IoT technology opens up the opportunity for a new wave of 5G services and applications that have not yet benefited from connectivity because of barriers such as the ability to connect the remote device to an electrical power source, the cost of the solution and the radio coverage necessary to communicate with it , " said Cătălin Buliga, Technology Director, Vodafone Romania.

NB-IoT technology has the potential to transform business models from a wide variety of industries due to its specific features that make it ideal to connect thousands or even millions of field devices. The technology offers strong radio coverage over extended areas, which extends to underground or underground devices. NB-IoT operates in licensed radio spectrum, which means that applications using this technology will benefit from the same level of security and reliability that we have become accustomed today to mobile networks.

The Vodafone Group has launched NB-IoT technology in Spain, Ireland, the Netherlands, the Czech Republic, Turkey, Italy, Australia, South Africa and Germany. Vodafone also set up a network of NB-IoT testing laboratories that provide the ideal test environment for pre-integration testing for application developers and device, module and chip manufacturers. 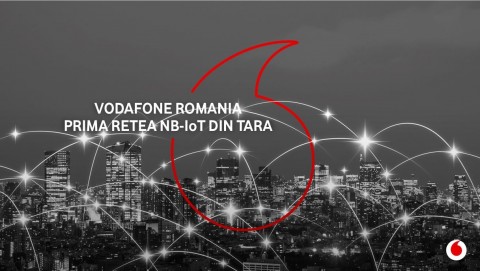