Vodafone Hungary announced the launch of the 4G+ service in February 2017 in the capital and Tatabánya with continuous developments across the country, including many big cities and settlements around Lake Balaton. The 4G+ service, providing faster data rates than standard 4G, is based on Carrier Aggregation technology that allows the combination of several separate frequency bands, significantly thus increasing the theoretical maximum of the download speed.

Vodafone Hungary's engineers have added this to the live network demonstration so far mainly 4X4 MIMO (multiple input, multiple output) antenna technology, which is capable of giving and receiving different information at the same time. 4G+ based on the current LTE-Advanced standard provides the opportunity for MIMO technology to handle up to fourteen antennas for the station and the device, thereby quadrupling it download the theoretical maximum of download speed. In addition, Vodafone has previously used 64QAM modulation capable of transmitting 6 bits at a time, it was turned off nationally at the same time 8 bit transmission capable 256QAM modulation, which encryption technology is suitable for it so the Samsung Galaxy S9 + used for the test will add up to 20% more speed.

Most of the commercially available devices can combine two bands, which is determines the theoretical maximum available download speed. The Samsung Galaxy S9 and S9 + but it can capture up to five different frequency ranges, so it can have up to 1 gigabit per second (Gbps) download speed. This is your test today with 1800, 2100 and 2600 MHz bands, all of which are 4-4 parallel stream flow, thus reaching 1Gbps download speed.

Carrrier Aggregation and MIMO technologies are a major step in the evolution of the 4G network. The demonstration speed is an excellent example of what's before the 5G network is introduced there are tremendous opportunities in the 4G + service", said Amrita Gangotra, a Vodafone Hungary's Deputy Chief Technical Officer. "By the end of March, Budapest We have made Carrier Aggregation technology available at 99% of our stations, the following months and years we are planning to launch more and more base stations in the country faster 4G + data transfer speeds", he added.

Thanks to our smart devices, we have a more connected life than ever before we are tied to our family members, our home, or even different time zones with millions of people. Thanks to the increasingly advanced data connectivity services, it is excellent quality content in real time, "said Balázs Kunos, Samsung Electronics Magyar Zrt. Director of Mobile Business. - Samsung is constantly developing it in the field of interconnected technologies: In 2009, we first applied LTE in the industry technology in modems, in 2016 we created the first 1 gigabit per second (gigabitper-second, Gbps) 5CA modem, while in 2017 we introduced the first 6CA modem 1.2 Gbps. We are proud of our Samsung Galaxy S9 and S9 + we are prepared for the future technological challenge, giving our users a timely, high-end smartphone."

What exactly is the speed achieved during the demonstration is a few easy-to-understand examples can be illustrated. A 1 gigabit download speed per second is a Blu-Ray disc data - 50GB - could only be downloaded in about fifty seconds. Other approaching 1Gbps bandwidth up to a few hundred companies a day it can be enough for your work. Another important factor is the response, that is, the delay Vodafone's role is to make the communication between devices as smooth as possible In Hungary, the delay was only 13-18 milliseconds (human blinking about 300-400 milliseconds).

The development of our existing network and the construction of the future network are connected with the present we get to the future. At one and the same time, we are in both areas: in the present, where our customers are providing high-quality networking service and providing the perfect user experience a goal, and of course in the future, which holds many technological innovations and in this we will be as reliable partners as we are in today's changing environment, "he said Dr. Gergő Budai J., Deputy CEO of Vodafone Hungary Corporate Relations. 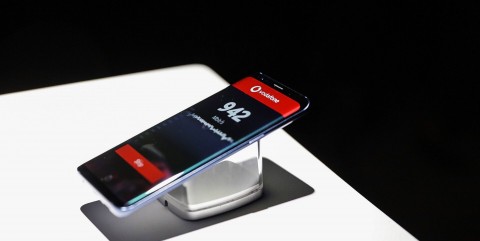