Vodafone has taken the next steps in the advancement of its mobile network performance by successfully conducting its first field demonstration of Massive Multiple Input Multiple Output (MIMO) using a Frequency Division Duplex (FDD) band.

Vodafone’s demonstration with Huawei, which took place yesterday at Cronulla in Sydney’s south, successfully demonstrated the viability of Massive MIMO over Frequency Division Duplex (FDD) bands; these bands are the most commonly used in 4G networks.

Vodafone’s General Manager of Technology Strategy, Easwaren Siva, said the demonstration is a huge leap in the evolution of the company’s 4G mobile network.

“This week’s demonstration is another significant step towards 5G, following our live 5G trial last year which saw speeds of up to 5Gbps,” said Mr Siva.

“When it is rolled out in an area, FDD Massive MIMO will give the Vodafone network multiple-fold increase in capacity, delivering a consistently high quality network experience, even in times of high usage. It will enable Vodafone to maximise the efficiency of our current spectrum to deliver a better network experience to our customers.”

To carry out the demonstration of FDD Massive MIMO, Vodafone used Huawei’s AAU solution which incorporates 32 small internal radio frequency transceivers that in combination allow 3D control or ‘beam-forming’ of the signals. ‘Beam-forming’ allows radio signals to be shaped and simultaneously directed toward users in both vertical and horizontal directions, creating an increase in network coverage and improved user data speeds.

“The data usage habits of Australians have changed dramatically in recent years with the rise of features such as mobile video and music streaming, with data usage increasing more than 60% year-on-year,” said Mr Siva.

“We expect to see the change continue as features such as Augmented Reality and 4K video become more mainstream. To meet this challenge we need to ensure our network is continually evolving. That’s what the FDD Massive MIMO demonstration has shown – that Vodafone is committed to developing and enhancing its network as Australian data usage habits and expectations change.”

Vodafone plans to roll out its FDD Massive MIMO technology to selected mobile sites during 2018. 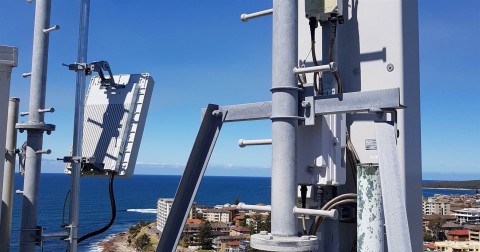