They form part of our major investment in building a world-class network infrastructure to support Gigabit UK, a nation where people will enjoy ultra-fast connection speeds of one gigabit per second on the move, at home or at work.

Our engineers are already laying the groundwork for 5G at more than 40 sites in Birmingham, Bristol, Cardiff, Glasgow, Liverpool, London and Manchester. Discussions with a number of enterprise customers are also underway, with a view to testing new 5G applications such as augmented and virtual reality in offices, factories and hospitals.

We are able to commit to conducting the most comprehensive 5G trial announced to date after winning the largest block of 5G spectrum in the recent auction and having conducted the first UK test of this spectrum across a live network a week later.  The upcoming trials will ensure that we are ready for the commercial launch of full 5G, which is expected to arrive early in 2020 to coincide with a wide choice of compatible phones and devices.

Both 5G and Vodafone Gigafast Broadband services will be connected by our nationwide, all optical fibre core network called RedStream, which currently links 1,300 broadband exchanges and nearly 1,600 other locations such as retail parks, new builds and business premises. Vodafone recently tested new ‘photonic’ technology capable of carrying information over the core network at speeds of up to 400 Gigabits per second.

Vodafone UK Chief Executive Nick Jeffery said: “We want to make 5G and new fibre broadband services available to consumers and business throughout the UK, delivering a Gigabit society for all. We will also be bringing ultra-fast 4G to several hundred sites in hard to reach rural areas this year, building on our position as the network that offers the best voice coverage in the UK.” 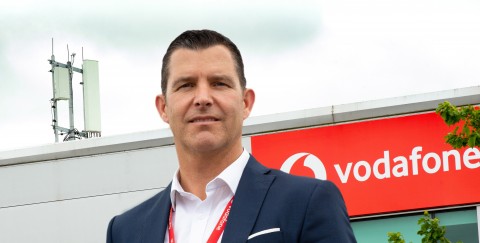