Finally, they have been cleared for mobile and Vodafone uses them immediately: We are talking about the 700 MHz frequencies, which were auctioned at the 2015 mobile auction and are now fully available. Vodafone welcomes this as an important step for the further expansion of mobile communications in Germany. In North Rhine-Westphalia and in Brandenburg, the Düsseldorf-based network operator has also immediately put into operation the first LTE mobile stations in the 700 MHz band, thus launching its large-scale 700-series expansion. In the next interim step, 200 mobile radio stations with 700 MHz frequencies will be part of the Vodafone network in Germany by the end of this financial year. This so-called UHF band (= Ultra High Frequency) is ideally suited for the expansion of mobile broadband Internet in the area due to its long range and good building supply. And it is precisely for this further broadband network expansion and the closure of dead spots in the mobile Internet that Vodafone Germany will be using the 700 MHz frequencies in future.

At the frequency auction by the Federal Network Agency in 2015, Vodafone secured key mobile radio frequencies for mobile broadband Internet and best voice telephony. A total of 20 MHz were also acquired in the important 700 MHz band. With frequencies in the 694 MHz to 790 MHz range now completely cleared for mobile and no longer hindering mobile and conventional TV broadcasting in the UHF band, the road to commercialization of the 700 MHz band is now finite free.

The development print at Vodafone

Vodafone's 700 MHz frequencies are an important building block in the current expansion sprint: At present, Vodafone has connected around 99.8 percent of the population to its mobile network. In addition, Vodafone supplies 93.7 percent of the population with the mobile broadband technology LTE. The current expansion goal of Vodafone is to supply the populated areas of Germany with LTE as comprehensively as possible. Therefore, by the end of this fiscal year, the Group is realizing a total of 5,500 LTE construction projects, of which more than 1,500 have already been completed. As part of this LTE expansion program, Vodafone will build completely new mobile stations and upgrade existing mobile stations (GSM and UMTS) for the first time using LTE technology. In addition, Vodafone will install additional LTE antennas on existing LTE sites. The aim is,

LTE enables cell phone calls in crystal clear quality and also broadband internet on the go. For companies in Germany, LTE supply brings a significant improvement in competitiveness, because a strong network infrastructure is the crucial raw material for growth, jobs and prosperity in the digital age. For example, LTE allows consumers to use the online portals of newspapers, magazines and TV channels. With LTE, customers can also quickly download HD movies, enjoy HD-quality videos, socialize and socialize, as well as watch major sports and cultural events in live streams - such as the Bundesliga matches. Moreover, in rural areas where DSL is poorly available, LTE is a viable alternative, 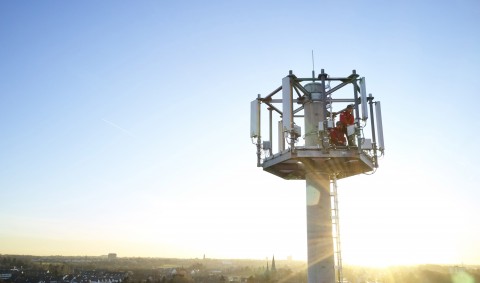