On April 9, 2019, Viettel announced a plan to improve 4G network quality. Technical solutions not only solve the problem of lack of 4G network in Vietnam, but also increase Viettel's 4G network speed up to 1.5 times faster now.

According to the plan, Viettel will add nearly 10,000 stations broadcasting 4G on 2100 MHz band, which has just been licensed by the Ministry of Information and Communications to 15 capitals of big cities and provinces with high demand for data such as Hanoi and Ho Chi Minh. Minh, Da Nang, Hai Phong, Quang Ninh ... Installation and optimal times are expected to be completed in the second quarter of 2019.

Also during this time, Viettel is releasing 2G subscribers out of 1800 MHz band, taking this entire band for 4G network. When completed, Viettel's high-speed 4G network capacity increased by 25% compared to the current because it is not shared with 2G network. Viettel becomes the only network in Vietnam deploying 4G network on both 1800 MHz and 2100 MHz bands.

In parallel with the addition of broadcast frequency band, many new technologies and solutions are implemented by Viettel to improve 4G service quality, more than 1,000 small cell station locations cover the concave areas. A series of devices dividing the coverage area is implemented by Viettel in crowded areas such as pedestrian streets, stadiums, festivals ...

Mr. Dao Xuan Vu, General Director of Viettel Network Corporation, said: “Currently, Viettel is the mobile network with the largest number of 4G subscribers and the data consumption trend continues to increase rapidly. In terms of having no dedicated band, these technical solutions help to improve Viettel's 4G service considerably. ”

Mr. Vu affirmed that when completing the upgrade plan, Viettel's 4G network capacity will increase from 25% - 50% depending on the area, the user's 4G data rate will also increase by an average of 1.3 - 1, 5 times the current.

Viettel is currently the telecom unit with the largest network infrastructure in Vietnam with nearly 130,000 broadcasting stations.The newly deployed 4G network is also equipped with nearly 50,000 base stations. 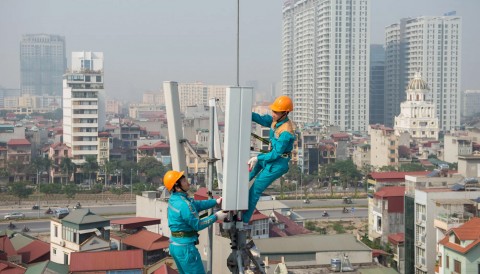