The era of 5G mobile networks has started in Lithuania: the leader of the country’s telco sector Telia Lietuva is the first operator in the country to launch the next generation 5G connection and demonstrated a new mobile speed record – in an active Telia Lietuva network data was transmitted at the speed of 1.8 gigabits per second (Gb/s).

“Since the very birth of contemporary mobile networks in Lithuania in 1995, we were the first ones in the market to introduce all three mobile network technologies - 2G, 3G and 4G, and today we are the first ones in Lithuania to start providing the next generation 5G connection. This step is important not only for us as a company, but for the entire country as well, as this reconfirms the fact that Lithuania remains the leader of Internet technology and has the platform of the digital future”, says Dan Stömberg, CEO of Telia Lietuva.

The 5G allows achieving high speed, imperceptible delay and secured storage, so devices connected to the network can use its resources to the maximum.

The first Telia Lietuva 5G mobile network stations were installed in Vilnius – Žvėrynas, which has a high concentration of business centres, and in Saulėtekis, which brings together research centres. Such a decision was made in the light of the growing potential of the capital in IT field and a large community of start-ups and researchers.

The company is currently using a non-commercial frequency for the 5G that is in the 3.75 gigahertz range. It was provided by the Communications Regulatory Authority of the Republic of Lithuania on Telia Lietuva request. Provision of the commercial 5G networks services should start in Lithuania after a frequency auction that is planned to be held next year.

The Minister of Economy Virginijus Sinkevičius emphasizes that being the first in the implementation of the next generation technologies and their adaptation for businesses gives a huge competitive advantage.

"5G infrastructure for the industries of the future implementing large and complex projects - smart factories, autonomous cars, virtual reality, smart cities and others - is a factor that makes further development of these industries impossible. Being one of the first ones in Europe to start using the 5G technology, Lithuania gains a critical advantage over the other European Union countries for several years at the least, both by helping local start-ups to grow and attracting innovative foreign companies”, says the Minister of Economy Virginijus Sinkevičius.

“The 5G will provide us with such capabilities that we would not even be able to exploit right now. Vilnius will be one of the first cities where things will be able to talk to things, making our life more convenient. And they will talk a lot. Thus, the launch of the 5G network is essential for the ambitious future of Vilnius! I want to congratulate Telia Lietuva on the new launch and to wish the company to continue testing all innovations in Vilnius, because this city is the best place for that”, said the Mayor of Vilnius Remigijus Šimašius.

During the event held by Telia Lietuva on Friday, the highest speed achieved in an active Telia Lietuva network and under outdoor conditions was demonstrated – data was transmitted at the speed of 1.8 Gb/s with a delay of a mere 7 milliseconds. This is the result disclosing the maximum Telia Lietuva mobile network capabilities with the available frequencies.

The data transmission record reached so far in an active network was achieved in 2016 and it was 750 Mb/s. The record also belongs to Telia Lietuva (then Omnitel).

The first 5G tests in the world were carried out in 2017; visitors of the Pyeongchang Olympic Winter Games could enjoy its opportunities this year. Operators from South Korea, Japan, China, US, Germany, Scandinavia and other countries started launching the 5G this year.

Telco experts forecast that this next generation mobile technology will become the engine of change and innovation in the next few years. The 5G will connect billions of devices in streets and buildings and will start a new era of the Internet of Things, when not only people, but also things, such as cars, robots, plant facilities, various sensors and other devices will be able to communicate with one another on the network. All of this will help expand and improve the existing services, create new ideas and business models that seemed impossible up until now. 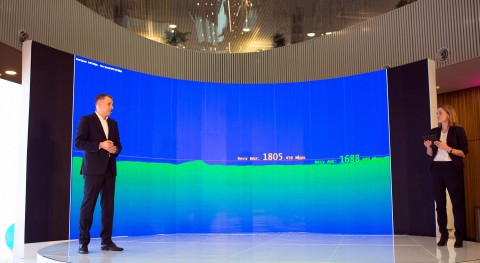