On May 15, Telenor Hungary launched its fifth generation (5G) mobile test network in Győr. The site selection at the Széchenyi István University and the downtown of Győr is not a coincidence: the telecom company, besides its own tests - the first in Hungary - also provides the university's engineers with the latest mobile network technology, which can give a great boost to the research and development based on 5G in Hungary. The test network also brings the technology of the future closer to business in the region.

The benefits of 5G mobile technology - with significantly higher download bandwidth, a very low response time, and a larger number of devices than ever before - are becoming more and more widely known, but the development of products and services based on these network capabilities is still awaiting market players.

To accelerate this process, Telenor signed a cooperation agreement with Széchenyi István University in Győr, in the framework of which, taking into account the importance of 5G technology, they are taking steps together to ensure that the future generation of engineers can continue their research on the latest mobile technology. The close collaboration of the university with the local industrial environment allows their results to reach business operators quickly and directly.

A domestic mobile historical moment was written at the press conference

As the mobile-historical event of the 5G test network transfer and announcement of co-operation, Ákos Kara, Secretary of State for Infocommunications and Consumer Protection, and Jan Hanus, CEO of Telenor Hungary, presented to the public on the 5G test network, the first 5G 5G smartphone and a test speed of 1.7 Gbps was downloaded to demonstrate the capabilities of the test network.

“Today, mobile telecommunications in Hungary has become an important milestone. We switched on the first 5G university test network in Hungary, and we hosted the first 5G video call on 5G smartphone in Hungary. The retail use of the 5G network will be an everyday practice in a few years. Therefore, today's event proves that Hungary is prepared for the challenges of the future. People are using more and more smart devices, a good quality stable 5G network in Hungary will be essential for their future operation. The 4G network in Hungary is currently among the best in the world. Our goal is to be the home's 5G network among the world's best networks. This would make the country's competitiveness even stronger, ” said Ákos Kara. State Secretary for Information and Consumer Protection.

“The quality of our Hipernet network is at the forefront of the world, and exploring the potential of 5G technology is the next step in keeping this standard long-term. We know a lot about the potential capabilities of the 5G network, the future self-driving cars, the new opportunities for telemedicine, and the many other attractive targets, but they have a long way to go. Tests in the real environment and our collaboration with the university are designed to make the current opportunities for industry and the public as soon as possible a tangible, real advantage of 5G, ” said György Koller , Deputy Chief Technical Officer of Telenor Hungary.

“We have come to another stage of dynamic development of Győr and Széchenyi István University. The co-operation agreement signed today is based on the unique urban co-operation within which the local government, the university and the actors of the economy work together to build the future in Győr. Győr and innovation are hand in hand, so it is no coincidence that we have a flagship role in research and development based on 5G. The project that is just starting out will represent the future in the city, ” said Dr. David David , Deputy Mayor of Győr County Town.

Telenor's 5G network partner is one of the world's leading 5G technology suppliers, ZTE Corporation, which not only supplied and deployed network components, but also provided two devices for testing from the world's first 5G smartphones. Thanks to this, the 5G experience in mobile phones was the first in Europe.

As part of the Telenor 5G test network, a total of 4 radio units were tested in 2 base stations in the 3.6 GHz range. There is a total of 100 MHz available for testing, with 1.8 Gbps download speeds available. The system also includes a fully self-contained core network that complies with NSA standards, which, together with the two base stations, forms a complete, live network. 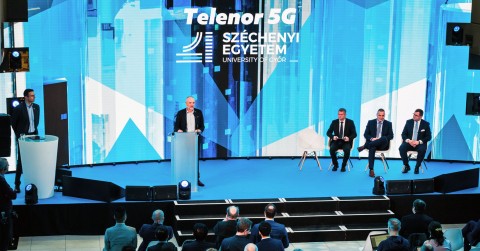