Ericsson and Tele2 have launched Russia's first 5G zone in central Moscow on Tele2's commercial network, setting into motion an agreement they signed in June this year. The non-stop outdoor 5G coverage is live in Tverskaya Street, the busiest part of the Russian capital, stretching between Red Square to Sadovoe Ring.

The area is ready for all kinds of demos exploring the opportunities of 5G, including immersive VR entertainment, smart buildings and other consumer and industrial use cases where high data speed and ultra-low latency are deemed critical.

The 5G pilot zone is deployed in the 28 GHz band in non-Standalone (NSA) mode, the frequency band for anchor LTE band is Band 7 (2600 MHz), and the 5G pocket routers supporting 28 GHz are used as end-user devices for mobile broadband services with ultra-high speeds.

Sebastian Tolstoy, Head of Ericsson in Russia, says: “As a recognized leader in 5G, we are launching Russia’s first 5G zone in Moscow jointly with Tele2. We have a history of working in close partnership with Tele2 and now we’re pioneering 5G in Moscow. With many live commercial 5G networks with named service provider customers in four continents – more than any of our competitors – we are looking forward to continue leading and driving innovation to ensure the digitalization of Russia.”

Sergey Emdin, Tele2 Russia CEO, says: “Despite fierce competition in the development of new technology, jointly with Ericsson we are the first in the Russian market to launch a 5G zone on our infrastructure. From the very beginning of its work in Moscow, the Tele2 network has been technologically ready for the future implementation of the fifth-generation communication standard. Today’s event means that the 5G era in Russia has already come – from tests and laboratory trials, we are moving to operating the technology on a commercial network. In the near future, Muscovites will be able to see for themselves what 5G will bring to the daily life, entertainment and development of smart city.”

Tele2 and Ericsson signed an agreement to deploy 5G technologies in Russia at the Mobile World Congress in Barcelona earlier this year. Under the terms of the agreement, more than 50,000 base stations will be deployed across the country as part of a five-year network modernization deal. The partners also signed a memorandum of agreement to launch a joint 5G trial zone in Moscow at the St. Petersburg International Economic Forum held last June.

Deployment of a 5G network is one of Russia’s priorities. According to “The Digital Economy of Russian Federation” national program, it is crucial to establish robust 5G communication in all main cities of Russia by 2024. 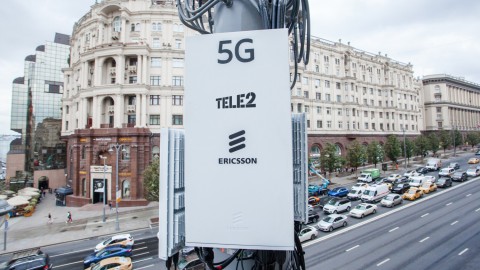