O2 continues to prepare for the arrival of fifth generation networks. The first in the Czech Republic to cover the whole city with the fastest internet. The technology allows data transfers with theoretical speeds up to gigabits per second - that is ten times more than the conventional 4G LTE network, which O2 covers the rest of the country.

"In Cologne, our customers can experience the real-world speed of mobile data, which will be commonly available in 5G networks, today, when the actual 5G coverage is limited to just a few pilot installations in the world," says O2 Jan Pear.

O2 with the support of this technology will be offered by O2 with a discount of CZK 5,000

Higher speeds can be achieved by combining several frequency bands and complementing them with 4x4 MIMO and 256QAM. In order for O2 customers to try out the fastest connection in Cologne, they need a LTE-enabled mobile phone of category 16 or higher, for example, the latest Samsung models. "We have therefore prepared a special offer at the Cologne stores to make the new technology as accessible as possible for the locals - the models from the Samsung GALAXY S9 series will offer our customers a discount of five thousand crowns," adds Jan Hruška.

Wireless internet at home with speeds of up to 250 Mbps

The mobile network serves not only to connect mobile devices, but also to connect households and businesses wherever traditional wired connections are not fast enough. Since mid-November, O2 has been offering a new generation of wireless Internet on a dedicated frequency. This technology is already being used by hundreds of customers across the country, and now O2 is also offering a tariff with speeds of up to 250/25 Mbit / s, which have so far only been available via cable.

A step closer to 5G

The fastest network is being built by O2 together with CETIN and the world's leading suppliers, while real-world experience will help develop the fifth generation network coverage after the necessary frequency bands have been auctioned and devices with this technology appear on the market. In addition to very fast mobile data, the 5G network features also enable massive development of the Internet of Things and the associated expansion of solutions for automation of production, smart cities and homes. Thus, the new generation of mobile internet will be used for example in transport, virtual reality, industry and production process management, sports, but also in healthcare. 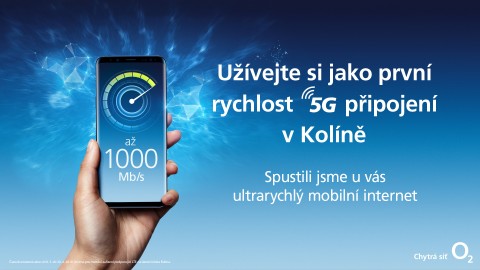