The Republic of Korea is the fifth country in the world to have held the four major international sports events, from the 1988 Seoul Olympic Games, the 2002 FIFA Korea-Japan World Cup and the 2011 Daegu Athletics Championships to the 2018 PyeongChang Winter Olympic Games.

KT has been responsible for the communication service of all four major international sporting events held in Korea so far. As the 2018 PyeongChang Winter Olympic Games come to an end, KT has become the fourth telecommunication company in the world to have been involved in all four sporting events.

KT has been striving for more than three years to introduce the world to its new 5G ICT technology, and in particular the Event Broadcasting Network and broadcast service by Relay Network provided at the 2018 PyeongChang Winter Olympic Games.

In March 2015, while the 5G concept and requirements had not yet been established, KT started working with global manufacturers such as Samsung Electronics and Intel to set out the 'Pyeongchang 5G Standard', the world's first 5G common standard. KT has developed various 5G network technologies and equipment and established a new ecosystem, which led to the industry's alignment.

Also, KT built a communication infrastructure over a distance greater than 11,000km to enable flawless operation of the Event Broadcasting Network and broadcast by Relay Network. During the Olympic events, more than 1,000 network experts were deployed to operate the communication infrastructure and to maintain 24-hour monitoring as well as manage the emergency recovery system.

People who used the PyeongChang Winter Olympic Games Communication Network praised the communication infrastructure and services provided by KT and defined them as "best ever".

According to KT 5G PR Center, 5G Connected, the 5G service was successfully inaugurated and has already gained worldwide popularity. CNN reported that "Spectators at the Pyeongchang Olympics aren't just getting to watch the ultimate showdown in winter sports. They're also witnessing the most high-tech Olympic Games in history." The British newspaper The Economist also commented on KT 5G, saying that "The next generation of wireless technology is ready for take-off".

5G Connected is a space for visitors to discover the world's first 5G network and 5G terminals. On average, there were about 4,500 visitors per day, with a peak of 10,000 visitors on February 16th, during national holidays. According to KT officials, the total number of visitors should exceed 100,000 by the closure of 5G Connected, at 8 pm on February 25th.

The 5G Connected hall did not only receive the general public, but also more than 400 ICT industry members who made the trip to try out KT's 5G technology used to create the world's first 5G pilot service. The venue was in particular visited at least five times by NTT DoCoMo network technology experts, who will be in charge of the network at the 2020th Olympic Games in Tokyo.

The most popular items among 5G Connected visitors were the 'Teleport', a 3D video that enables the viewers to leap from the ski jump slopes into the future, and the 'Ice Hockey Challenge', a game which provides users with a fun experience of large-scale video data transmission through the 5G network.

Gwanghwamun KT Live Site in Seoul was visited by 120,000 individuals who could not make it to Pyeongchang and Gangneung, but wanted to feel the atmosphere of the Winter Olympics.

The competitions were broadcasted on large screens inside and outside Gwanghwamun KT Live Site and on a huge Media Fa?ade installed outdoor on the wall of the KT Gwanghwamun West building. On February 17th, the day of the women's 1,500m short track speed skating competition where Choi Min-jeong won a gold medal, a crowd of more than 1,200 people came to KT Live Site in Gwanghwamun and cheered the Korean national team.

Meanwhile, the public opinion welcomed KT's achievement as a significant step forward. KT used the 5G network technology to enable people to enjoy the PyeongChang Winter Olympic Games, even from outside the stadium, and let the viewers and spectators feel as if they had personally entered the stadium.

OBS CTO Sotiris Salamouris stated that among all the 5G network technology introduced by KT during the Olympic Games, the most remarkable one was the technology used for the bobsleigh competition. He explained that "5G capabilities are open, widespread, and offer huge bandwidth with little latency. What we see in the future is 5G becoming the foundation for wide-area camera needs like marathons, cycling, or helicopters."

"A lot of KT employees have been working hard for long hours to ensure the best outcome for the 2018 PyeongChang Winter Olympics and I am pleased that the Games came to a successful close," said Oh Sung-mok, head of KT's Network Division. "KT has acquired extensive knowhow thanks to its role of communication service provider for all four major international sporting events. We will do our best to lead Korea into the fourth industrial revolution, using this expertise and KT 5G network technology. " 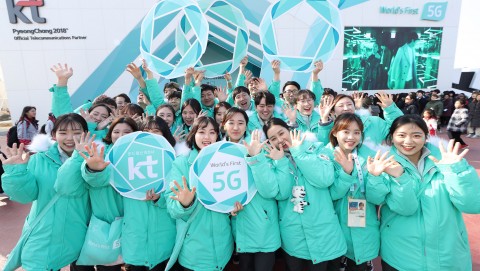