Delivering Gigabit LTE speeds, this is the first commercial LAA rollout in the region and is part of the agreement entered by MTS and Ericsson in 2017 to upgrade the MTS network with Ericsson Radio System and core network solutions and prepare for 5G and IoT.

LAA is an important technology in the LTE network evolution to 5G, providing access to new unlicensed frequencies. With this milestone, MTS has surpassed its previous 700Mbps speed record, enabling the service provider to take the next step in turning its mobile infrastructure into gigabit-capable.

Andrey Ushatsky, Vice President, Technology and IT, MTS, says: "With the launch of the commercial high-speed LAA-network in cooperation with Ericsson and Qualcomm Technologies, MTS again confirms its status of a technological leader. This is the first LAA network in Russia and Eastern Europe and an important milestone on the way to 5G. LAA will allow us to build gigabit LTE networks quickly and cost-effectively in places with active traffic consumption, where operators do not always have enough available frequencies in the licensed spectrum.”

Sebastian Tolstoy, Head of Ericsson Russia, says: “LAA gives service providers access to new spectrum, increasing network capacity and supporting both higher peak rates and higher-than-average speed rates. This commercial LAA rollout marks another important milestone in our strategic cooperation with MTS. Earlier we achieved peak throughput data rates of 25 Gbps at our joint 5G trial. The next step is to prepare for a new demonstration of enhanced 5G capabilities during the football tournament in Russia this year.”

The deployment took place in a large trade center on May 17 following a series of tests conducted on a live MTS network using a commercial smartphone. The gigabit-per-second speeds were achieved using Ericsson Radio System software, including 256QAM and 4CC Carrier Aggregation of 10 streams with 4x4 MIMO on a 20 MHz licensed carrier coupled with 3x20 MHz LAA. In addition, a range of Ericsson Radio System products including the LAA-powered Radio 2205, Baseband 5216, and B3 1800 MHz band configured Radio 2212 were used in the rollout. 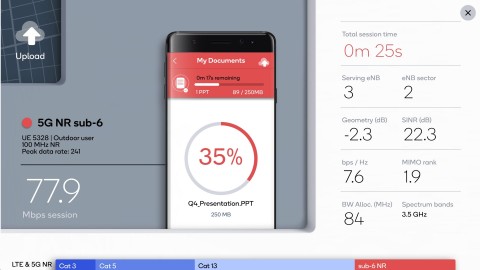