San José, Monday, March 5, 2018. Claro and Telefónica bid $19,000,000 and $24,000,000 respectively for the contracts of the international public tender for the use and exploitation of radio spectrum that will make more spectrum available to telecommunications operators for the deployment and strengthening of International Mobile Telecommunications networks.

For Edwin Estrada, Vice Minister of Telecommunications "This tender that we have just concluded and whose contracts were endorsed by the Comptroller General of the Republic weeks ago, brings various benefits for the inhabitant.

In the first instance, the issue of quality, since the objective of this tender is to improve quality, together with the first objective of the first tender that was launched in 2011 and that was the topic of penetration, which according to statistics is compliment.

Another benefit is the entry of fresh resources into the National Telecommunications Fund to be invested in projects aimed at people in vulnerable conditions and people living in economically unattractive areas for the investment made by companies.

This money will be used to bring connectivity, digital literacy and that people regardless of their condition and the areas where they live, have access to telecommunications quality services with which they can improve their quality of life through the productive use of technologies of information, "said Vice Minister Estrada.

With this second concession, the Executive Power, in compliance with the principles of publicity, transparency and freedom of participation, assigned 70 MHz of radio spectrum for Claro and Telefónica companies, with the aim of improving the quality of mobile telecommunications services in benefit of all users, ensuring that the country gets the benefits of technological progress from an efficient and effective allocation of a strategic resource of the State.

In 2011, the first concession of radio spectrum for mobile networks marked the entry of more competitors to the newly opened telecommunications market, whose objective was to increase the penetration of mobile telephony services. 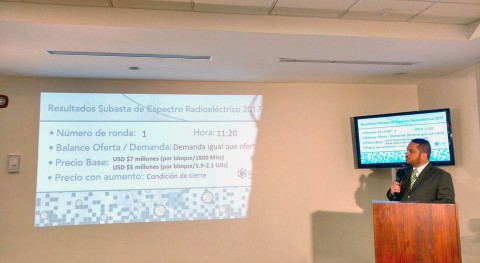