October 24, 2017, Moscow. PJSC VimpelCom (Beeline brand), Huawei and Qualcomm Technologies, Inc., a subsidiary of Qualcomm Incorporated, have completed LTE testing in the unlicensed spectrum of 5 GHz, also known as LTE License Assisted Access (LAA). The testing was conducted within the framework of the memorandum on joint testing and launch of 5G technologies, signed by VimpelCom and Huawei in October 2016.

It is already known that the future standard 5G implies the use of a new radio interface: 5G-NR, as well as the aggregation of all possible frequency spectra and the use of Massive MIMO * technology. This will achieve speeds of several tens of gigabits per second, which will contribute to the development of new digital mobile services. Conducted testing with Huawei and Qualcomm Technologies is one more step towards the next generation of mobile communication.

LTE License Assisted Access (LAA) was tested by combining the 10 MHz band (Band 7) band and two 20 MHz bands in the unlicensed 5 GHz band. This technical solution allowed to achieve the upload speed of the subscriber device at more than 480 Mbit / s.

Testing was carried out at the Huawei LampSite base station. The LampSite solution allows you to quickly and efficiently organize network coverage indoors: shops, shopping centers, offices, cafes, restaurants and bars. Currently, the amount of traffic transmitted inside the premises can reach 90% of the total number of transmitted data. As a test terminal, a mobile test device with Qualcomm® Snapdragon ™ X16 LTE, the first commercial modem supporting LAA, was used. It is expected that the first commercial samples of subscriber devices supporting LTE LAA will be available before the end of 2017.

Martin Shkop, Executive Vice President, Infrastructure Development, PJSC VimpelCom: "LTE LAA testing is another step in the implementation of our 5G strategy, which is based on the gradual introduction of technologies that precede the emergence of a new standard. We avoid a useless race at maximum speed and focus on technologies that bring real benefits to our customers and improve network performance. Integration of licensed and non-licensed spectra will form the basis for the creation of a universal convergent network. We are satisfied with the test results and cooperation with Huawei and Qualcomm, which are our two key strategic partners in the development of 5G. "

Zhao Lei, Director of the Key Accounts Department at Huawei in Russia: "Huawei has been involved in the development of the 5G standard since 2009, in this area we employ 2000 specialists in 11 research centers around the world. Until 2018, we plan to invest in the development of the standard of $ 600 million. Together with our strategic partner, VimpelCom, we took another important step towards the development of world-class network services in Russia. But we do not want to stop at what has been achieved and will continue to jointly introduce new technologies. "

Julia Klebanova, Vice President, Business Development, Qualcomm Europe Inc .: "Today's successful testing of LAA is another stage in the cooperation of our companies in the field of the latest communication technologies, which ensure a constant increase in the speed and improvement of the network capacity of VimpelCom. The Snapdragon X16 LTE modem is the industry's first commercial LAA-enabled modem that provides mobile devices in LTE networks with unlicensed spectrum aggregation. Using LAA and the licensed spectrum, VimpelCom will be able to offer users gigabit LTE speeds and the most advanced network services that will be available to owners of smartphones running on Snapdragon, whether it's a continuous streaming of 4K content. 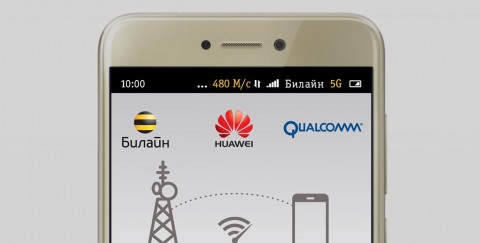