In Vienna, a new mobile technology technology celebrated its Austrian premiere on Thursday: In Seestadt Aspern, Telekom provider Drei has taken the first step into the age of 5G, the next mobile generation, with the launch of one of the world's first commercial operations Massive MIMO, a so-called Pre5G technology. With the newly introduced frequency spectrum, Drei can increase its network capacity fourfold compared to previously used technologies. Customers can use Pre5G with their existing 4G modems and routers. During the year, Drei will roll out the network upgrade throughout Vienna and throughout Austria, where needed.

Vienna's Finance and Economic Councilor Renate Brauner: "Hardly anywhere else in the world is the mobile Internet as widespread as ours in Vienna: More than half a million Viennese households already have a private Internet connection via mobile phone network That's why I am delighted that Drei in our city is one of the first to announce the next mobile age, proving that Vienna is also one of the most innovative cities in the world in telecommunications. "

3CEO Jan Trionow: "Three is by far the largest mobile service provider in Vienna, with around 35 percent of mobile customers and more than 40 percent of users of mobile broadband in Vienna being customers of 3. With a monthly data consumption of 15 GB on average, only the world now uses it Finns are making their mobile Internet more intensive than our 3 customers.With the Austrian premiere of Pre5G, we can already take a decisive step into the new mobile age for the Viennese and increase our Internet capacities many times over. "

Massive MIMO will be a key component of the next generation of mobile communications. With its Pre5G solution, Drei is already integrating the new technology into the existing 4G network. Via a transmitting station, up to eight users per cell can surf the Internet in parallel with maximum available speed.

In just six weeks, Drei has upgraded all of the broadcasting stations in Seestadt Aspern to the new Pre5G standard. In the further course of the year, Drei will extend the Pre5G supply to the whole of Vienna, thereby creating optimal conditions for the actual launch of 5G in two years.

With 5G, the next mobile generation, the networks will become even faster worldwide from 2020 and will enable gigabit transmission rates for the first time. The goal is not only to test 5G, but to make it available as quickly as possible to Viennese households and companies.

The initiative is an ideal fit for the Seestadt Aspern, Vienna's flagship project of the Smart City. Urban Lakeside is already the place where intelligent ideas, concepts and technologies can be combined and tested under real conditions. In addition to the first pilot factory in Austria for Industry 4.0 or the Living Lab in the energy sector, the Seestadt is thus a pioneer for the future of telecommunications.

Vienna wants to become a 5G pilot city and score points in the location competition.

"If we succeed in being faster than other cities in the introduction of 5G, this is a real opportunity for Vienna as a business location." Sufficient broadband coverage throughout the city is crucial for companies in terms of digitization and innovation We give the Viennese companies a real start-up advantage with a quick 5G start, "emphasizes Brauner.

"We want to fine-tune the swift 5G rollout and hope for even faster approval procedures, and if we can do that, I think it's realistic that we can shorten the lead times for approving new locations from one to two years to a few months. Then we can turn Vienna into a true 5G pilot city, "said Trionow. 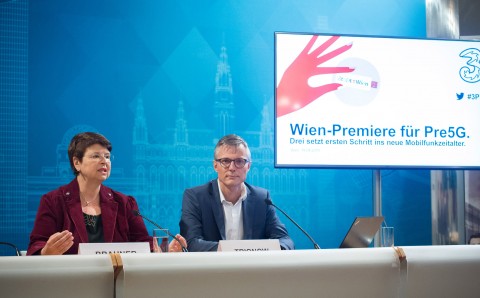